We Will Never Forget

Please hear our cries and our broken hearts for the many that were lost during the attack on America. Please comfort to the families and friends of all that were lost. We don’t always understand why this happens but we ask that through you we will feel a comfort and a better understanding of our tragedy.

Please hear our prayers and be ever near us. Amen.

A Message from NEC Jim Roberts 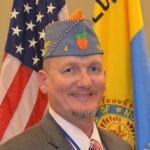 We as members of the SAL need to be strong and do what we can to remain that way. I ask that we all in this great Detachment pray for those who have been affected by this terrible tragedy, the airline passengers, the people in and around the Trade Center towers, the rescue personnel and all the families and friends of the victims.

Please take a moment of silence at your Squadron meetings to remember those that have fallen. A prayer has been circulated through out the Detachment that I feel is appropriate to be given at the opening or closing of your meetings. That prayer is printed above.

Thousands of lives one September day
Were brutally and cowardly taken away
Disbelief, panic, the smoke and screams
Sadly shook the American dream.

Recruits and veterans watched in horror.
As terrorism knocked upon our door
United we stand, divided we fall.
Now becomes our battle call

Race or color size nor age
None is spared the sense of rage
Wave our flag and display it proud
Shout USA, and shout it loud.

Remember the day our country shook
And remember to take a second look.
Old Glory still stands proud and tall
A symbol to reminds us all.

THESE COLORS MAY BLEED, BUT THEY’LL NEVER RUN!

Raymond York, one of New York’s Bravest, gave his life on September 11, 2001, while attempting to save his fellow citizens during the terrorist attack on the World Trade Center.

In addition to being a firefighter, Raymond was also a member of the Sons of The American Legion. He belonged to the Broad Channel S.A.L. Squadron # 1404, where he held the office of 3rd Vice Commander.

On Saturday morning, September 15, 2001, Past National Commander Christopher Cerullo (NY) attended his memorial mass. He sat with his family, hundreds of firemen, and members of The American Legion Family. He listened to the words of his parish priest and of his fellow firemen. They told of the love that he had for his country, and his pride in being a member of the Sons of The American Legion.

Raymond will be greatly missed by both organizations to which he belonged.

Cards of sympathy can be sent to his post at the following address:

Another Son who lost his life in the WTC attack was 42 year-old Edward Beyea. Ed was a Life Member of Squadron #173 in Bath, New York.

Ed was a computer programmer who worked for Blue Cross/Blue Shield in one of the Towers. Ed was paralyzed from the neck down and he was confined to a wheelchair. Witnesses reported that a friend of Ed’s made it out of the building, but went back in to help him get out. They were last seen trying to maneuver down a stairway. Ed is survived by his mother.

Ed will be missed by us all.

The Ed Beyea Scholarship was established at his former high school to honor him. Contributions can be made payable to:

Word has been received of a third Son that perished on September 11, 2001. Gerald Atwood a member of Squadron 1060 in Brooklyn, NY.

Gerald was a New York City firefighter assigned to Ladder 21, and was among hundreds of firemen killed after responding to the World trade Center on that fateful day. Gerald was an eight year veteran of the FDNY working out of “Hell’s Kitchen”. He leaves behind his wife and three very young children.